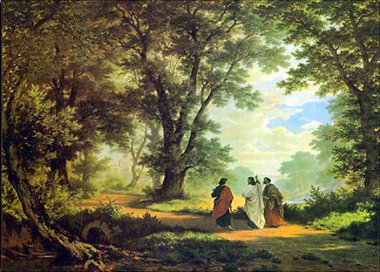 
It’s one of the most compelling narratives in all of Scripture.
So fascinating is the scene, in fact, that Luke opted to record it in detail.

Two disciples are walking down the dusty road to the village of Emmaus.
Their talk concerns the crucified Jesus.
Their words come slowly, trudging in cadence with the dirge-like pace of their feet.

“I can hardly believe it. He’s gone.”

Just then a stranger comes up from behind and says,
“I’m sorry, but I couldn’t help overhearing you.
Who are you discussing?”

They stop and turn.
Other travelers make their way around them as the three stand in silence.
Finally one of them asks, “Where have you been the last few days?
Haven’t you heard about Jesus of Nazareth?”
And he continues to tell what has happened.
(Luke 24:13-24)

This scene fascinates me—
two sincere disciples telling how the last nail has been driven in Israel’s coffin.
God, in disguise, listens patiently, his wounded hands buried deeply in his robe.
He must have been touched at the faithfulness of this pair.
Yet he also must have been a bit chagrined.
He had just gone to hell and back to give heaven to earth,
and these two were worried about the political situation of Israel.

“But we had hoped that he was the one who was going to redeem Israel.”

But we had hoped …
How often have you heard a phrase like that?

“We were hoping the doctor would release him.”
“I had hoped to pass the exam.”
“We had hoped the surgery would get all the tumor.”
“I thought the job was in the bag.”

Words painted gray with disappointment.
What we wanted didn’t come.
What came, we didn’t want.
The result?
Shattered hope.
The foundation of our world trembles.

We trudge up the road to Emmaus dragging our sandals in the dust,
wondering what we did to deserve such a plight.
“What kind of God would let me down like this?”

And yet, so tear-filled are our eyes and so limited is our perspective that
God could be the fellow walking next to us and we wouldn’t know it.

You see, the problem with our two heavy-hearted friends was not a lack of faith,
but a lack of vision.
Their petitions were limited to what they could imagine—an earthly kingdom.
Had God answered their prayer, had he granted their hope,
the Seven-Day War would have started two thousand years earlier and
Jesus would have spent the next forty years training his apostles to be cabinet members.
You have to wonder if God’s most merciful act is his refusal to answer some of our prayers.

We are not much different than burdened travelers, are we?
We roll in the mud of self-pity in the very shadow of the cross.
We piously ask for his will and then have the audacity to pout
if everything doesn’t go our way.
If we would just remember the heavenly body that awaits us,
we’d stop complaining that he hasn’t healed this earthly one.

Our problem is not so much that God doesn’t give us what we hope for
as it is that we don’t know the right thing for which to hope.
(You may want to read that sentence again.)

Hope is not what you expect; it is what you would never dream.
It is a wild, improbable tale with a pinch-me-I’m-dreaming ending.
It’s Abraham adjusting his bifocals so he can see not his grandson, but his son.
It’s Moses standing in the promised land not with Aaron or Miriam at his side,
but with Elijah and the transfigured Christ.
It’s Zechariah left speechless at the sight of his wife Elizabeth, gray-headed and pregnant.
And it is the two Emmaus-bound pilgrims reaching out to take a piece of bread only to see
that the hands from which it is offered are pierced.

Hope is not a granted wish or a favor performed; no, it is far greater than that.
It is a zany, unpredictable dependence on a God who loves to surprise us
out of our socks and be there in the flesh to see our reaction.

From God Came Near: Chronicles of the Christ
Copyright (Thomas Nelson, 1985, 2004) Max Lucado

Companion of the Souls

When the two disciples recognised Jesus as he broke the bread for them
in their house in Emmaus, he "vanished from their sight" (Luke 24:31).

The recognition and the disappearance of Jesus are one and the same event.
Why? Because the disciples recognised that their Lord Jesus, the Christ,
now lives in them ... that they have become Christ-bearers.

Therefore, Jesus no longer sits across the table from them as the stranger,
the guest, the friend with whom they can speak and from whom
they can receive good counsel. He has become one with them.
He has given them his own Spirit of Love.
Their companion on the journey has become
the companion of their souls.
They are alive, yet it is no longer them,
but Christ living in them (see Galatians 2:20).

On the Road to Emmaus
13 Now that same day two of them were going to a village called Emmaus,
about seven miles from Jerusalem.
14 They were talking with each other about everything that had happened.
15 As they talked and discussed these things with each other,
Jesus himself came up and walked along with them;
16 but they were kept from recognising him.
17 He asked them, What are you discussing together as you walk along?
They stood still, their faces downcast.
18 One of them, named Cleopas, asked him,
Are you only a visitor to Jerusalem and do not know
the things that have happened there in these days?
19 What things? he asked.
About Jesus of Nazareth, they replied.
He was a prophet, powerful in word and deed before God and all the people.
20 The chief priests and our rulers handed him over to be sentenced to death,
and they crucified him;
21 but we had hoped that he was the one who was going to redeem Israel.
And what is more, it is the third day since all this took place.
22 In addition, some of our women amazed us.
They went to the tomb early this morning
23 but didn't find his body.
They came and told us that they had seen a vision of angels, who said he was alive.
24 Then some of our companions went to the tomb and found it just as the women had said,
but him they did not see.
25 He said to them, How foolish you are, and how slow of heart to believe all that
the prophets have spoken!
26 Did not the Christ have to suffer these things and then enter his glory?
27 And beginning with Moses and all the Prophets, he explained to them
what was said in all the Scriptures concerning himself.
28 As they approached the village to which they were going,
Jesus acted as if he were going further.
29 But they urged him strongly,
Stay with us, for it is nearly evening; the day is almost over.
So he went in to stay with them.
30 When he was at the table with them, he took bread, gave thanks,
broke it and began to give it to them.
31 Then their eyes were opened and they recognised him,
and he disappeared from their sight.
32 They asked each other,
Were not our hearts burning within us while he talked with us on the road
and opened the Scriptures to us?
33 They got up and returned at once to Jerusalem.
There they found the Eleven and those with them, assembled together
34 and saying, It is true! The Lord has risen and has appeared to Simon.
35 Then the two told what had happened on the way,
and how Jesus was recognised by them when he broke the bread.
Luke 24:13-35