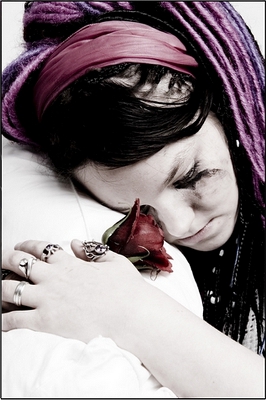 
He's gone.
Has been for weeks now, but it never really hit me until just now,
when Grandma gave me the bulletin from his funeral.

"Celebration of Life for Amos Marvin Davis" it said.
Seven little words, but they bring tears to my eyes.
The "Catfish King" reigns no longer.
The sweet man who meant so much to our family - to me - is dead.

Every time I went to stay with my Grandpa, we would go to his restaurant.
It was tradition. He called me his Baby Girl.
When I wasn't with Grandpa when he visited Marvin at the restaurant,
he would always ask about his Baby Girl.
"Where is my Baby Girl?  How's my little Baby Girl?" he'd say.
My picture was on the wall there.

My Grandma tells me that his daughters are going to re-open the place.
That means nearly nothing to me.
Without him there, there is no meaning, no point to the place.
My brother was sitting beside me, and softly said, "that's sweet, what you wrote."
I am openly crying now.
"It's ok, Heather." he says, tears in his eyes, "we'll get through it."

Mike had told me to pray.
To be honest, I didn't want to at first.
After hearing about how people prayed for comfort and immediately felt this miraculous difference,
and even the LORD himself, I was scared that I wouldn't be able to feel anything.
I don't know why this frightened me so much,
but I was terrified that I wouldn't be able to feel any difference.

After praying, I'm not going to lie and say I was "overcome" with anything.
I didn't immediately feel peace wash over me.
I was still crying.
I wondered what I had done wrong.

It was then that Daniel walked into my room.
I never allow him into my room.
This time, I motioned for him to join me on my bed,
and he wordlessly sat down and wrapped his arms around me.
I buried my head in his neck, and he whispered comforting things into my ear while I sobbed.
Eventually, I began to feel much better.
I began to realize that I was not the only one to feel his loss.
I now understand that even though I didn't get the response I expected,
God didn't abandon me.

I saw God in my little brother today, and he helped me more than I can express.
I can't believe I didn't want to pray.
If it weren't for my promise to Mike,
I probably wouldn't have, and I would still be sobbing right now.

You know how people say they are oddly at peace, despite the circumstances,
after talking to God?
I can now testify that what they're saying is true.
Though my eyes are still wet, I am no longer crying.