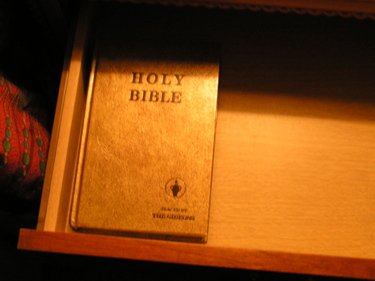 
My bookshelf holds many copies of the Bible in various versions,
but there is one Bible that stands above them all.
It is a Bible published by the Gideons International.

It was given to me as a gift from the Gideons in 1983, after sharing my story at one of their meetings. The Gideons hold a special place in my heart, for it was through their ministry that the Word of God came into our family and brought the message of Salvation that is found in the Gospel of Jesus Christ.

It was my father, Joseph Aaron Lessin, who discovered a Gideon Bible at his hotel while visiting
Las Vegas. He was at the gambling table when he heard an unknown voice telling him to leave.
He was restless and went to his room. He decided to write a letter but did not have any writing paper. As he searched the room for some paper, he discovered a Bible tucked away in the back of one of the desk drawers. Here is how he described that moment...

“Drawer after drawer was empty of any paper. Opening the last drawer I realized something was pushed into the back. Reaching in, I discovered a book. Relieved at finding something to do,
I pulled it out into the light. ‘A Bible!’ I exclaimed out loud. I had never read a Bible—only the Hebrew prayer book I had purchased earlier back in New York.

Propping some pillows up on the bed, I made myself comfortable, ready to look at my discovery. Opening it randomly, I turned to Proverbs and began to read. I read for hours. A faint glimmer of dawn began to show before I finally put the Bible down. I felt I could never let this Bible out of my sight; it seemed like my own personal treasure! Since I had no knowledge of where I could ever find another Bible, I decided to steal it when it came time to check out of the hotel.”

My father went on reading his “treasured discovery” for several months. While reading the book of Isaiah my father’s spiritual eyes were opened. He saw, without question, that Jesus Christ was his Messiah. At the age of 40, my father’s life was totally transformed by the power of the Gospel.
Jesus made him into a new man, a redeemed man, a whole man, a saved man.

The Lord has given me many opportunities through the years to share the story of how Salvation came to my family through the placement of a Gideon Bible in a Las Vegas hotel. I don’t know the person who placed the Bible that my father found, but I am eternally grateful that someone believed in the Truth of the Word of God and was willing to place it in the room where he stayed.